Francene the Frog: And her Friends in the Outback

It had been a long dry summer and there was little water left in the small pool at the foot of the rocky outcrop. If not for the seepage rising from a spring deep below, the pool would have dried out long ago. Now, as the sun crept into the eastern sky, its pale beams chased away the lingering shadows of night, to reveal a halo of mist rising from the water. As the shadows gradually cleared, a little frog, Francene, could be seen — sitting quietly alone — sheltering on a narrow ledge under an overhanging rock at the side of the little pool.

Francene was a Shoemaker frog (Neobatrachus sutor) and her large eyes were keenly watching, and she was listening, straining for a sound. Listening. Watching. Listening, as she had done now for many months, for that short repetitive ‘Tap! Tap tap!’ — ‘Tap! Tap tap!’ — the mating call of the male Shoemaker Frog. But no call came, nor would it For although the rock pool at Petrudor Rocks Reserve had once been home to several species of arid zone frog, there were now few survivors. 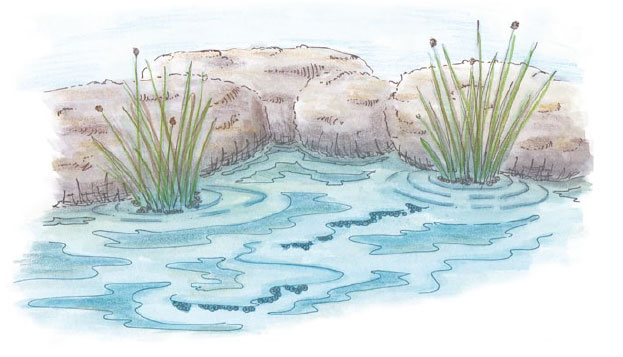 Francene was now the only remaining member of her species and even though she had friends among the other small creatures, she was a lonely little frog. She longed to find a mate and fulfill her destiny, to spawn as her mother had done and produce lots of baby tadpoles. But she knew she must be patient; the season would change and rain would again bring life to the bush land.

As the light grew stronger it revealed that, although rather small (35 mm), Francene was a pretty little frog. She had a small plump body, short legs with heavily webbed toes, and her back was a lovely bright yellow, scattered with numerous irregular patches of rich brown. Set above a rounded snout, she had large speckled, light brown eyes — intelligent and friendly.

But of course, Francene didn’t start out life as such an attractive little frog. In fact, when first hatched as a baby tadpole from one of the hundreds of tiny eggs laid by her mother, she looked more like a short piece of black cotton, with a little blob of Jelly attached at one end.

Francene was born upstream from the pool at Petrudor Rocks in one of several small freshwater pools formed in the usually dry creek bed after a late-summer storm. Following rain these pools soon become havens for the bushland creatures from the nearby parched countryside. Frogs of different species appeared, as if from nowhere, to breed. Francene’s mother was one of them, laying hundreds of tiny eggs, connected string-like together and submerged in the open water.

Many other frogs spawned about the same time, and a week later the eggs started to hatch and hundreds of tiny tadpoles settled like a living carpet on the bottom of the pool. They shoved and pushed at each other as they competed for room to rest while they developed their mouthparts, tail fins and gills. And each little tadpole had a small blob of egg yolk In its gut, which they lived on for the first few days after their birth. 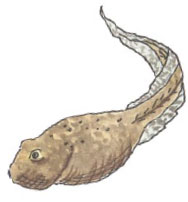 This early period is one of the most dangerous in a baby tadpole’s life. Larger predators will eat most of them. When you’re a tiny tadpole at the bottom of natures food chain, every creature above wants you for a meal. And although tadpoles and frogs live mainly on plants and algae, they are also predators and will eat whatever they can catch, even other smaller tadpoles and frogs. Less than 1% of tadpoles will survive to become adult frogs: survival becomes a frantic race — eat, grow bigger and try to avoid being eaten.

Francene’s little creek bed pool supported a range of aquatic and territorial bushland creatures. As well as tadpoles and adult frogs, there were small native fish, water snails, water fleas, midge larvae, aquatic worms, shrimps and gilgie, water boatman and the larvae of dragonflies, damselflies and water beetles, all competing for food and life. And of course, there were water birds and many other bush animals coming for a drink and the chance of a meal. It was a very dangerous place for any baby creatures.

But Francene’s senses were keener, and she could swim much faster than most of her brother and sister tadpoles. Any unusual movement in the water or shadow overhead would send her scurrying to hide out of harm’s way. So, as most of the tadpoles and other small creatures gradually perished, Francene survived. Her little body grew plump and oval, and her thin tail grew long and flat. She soon looked like a funny little fat fish.